The adventures began even before landing in the Delhi airport. As we were beginning our approach, the pilot came over the intercom and said, “Ladies and gentlemen, I just wanted to inform you that the preliminary results from the elections are in, and it looks like Modi will be the winner.” Like a rookie, I was ignorant of the fact that elections were underway. It made me nervous. How did the Indian people feel about these results? What if they disliked them? Would there be protests, demonstrations, unrest, or riots? I was especially nervous about the situation in West Bengal, where Kolkata is… a primarily communist state.

Upon leaving the airport, we were able to more accurately gauge the reaction to the election. The streets were mayhem… in a good way. We quickly learned any anxiety we had in this regard was baseless. Modi had won the election with 80% of the popular vote. Celebratory parades wound through the local thoroughfares. A random man on the street bought us gulab jamuns (honey-soaked donut balls). Flowers and fireworks abounded. (I feel like my ears are still ringing from a near-miss with a firework). Music blasted from every corner, and the streets were painted in orange, white and green.

Monkeys on the rooftop in Agra

This was my second trip to India, Sara’s third. This time we brought Sara’s sister Sidney with us, who has wanted to go to India since Sara first visited there 8 years ago. Our first night in Delhi we stayed near the New Delhi Station since we were taking a train the next morning to Agra. We spent the afternoon window-shopping, eating, and trying to avoid jet lag and being blown up by fireworks.

I wish the doors in my house looked like this.

The next morning we made our way to the train station. During the train ride we were befriended by an English teacher who wanted help with honing his American pronunciation. After meticulously picking through the finer details of every phonetic sound in the English language, we pumped him for recommendations about traveling in India. A local opinion will always trump the travel book, in my opinion. He told us more about his hometown and language (Malayalam).

At the train station

View from our hostel in Agra

We arrived in Agra late morning and caught an auto-rickshaw to our hostel, which had a stunning view of the Taj Mahal from the rooftop. After dropping our bags, we headed to Agra Fort. Overlooking the Yamuna River and the Taj Mahal, this millennium-old for was briefly a luxurious prison to the creator of the Taj Mahal, Shah Jahan, after he was deposed by his son. The fort’s beautiful architecture is a mix of red sandstone and the same white marble used to construct the Taj Mahal. 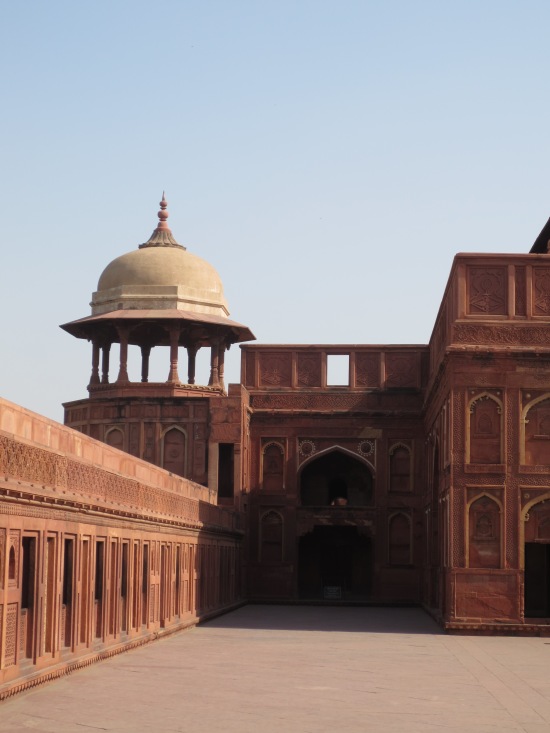 Some much-appreciated shade at Agra Fort

If I’m ever imprisoned, I want to my view to look like this.

Next, we made our way to the Taj Mahal. I’ll admit: I had high expectations of the Taj Mahal. But even with the punishing heat of the afternoon sun, the building did not disappoint. I can’t decide what is more impressive: that the entire mausoleum is constructed of white marble, or that it was constructed in the 1640s. The central dome is estimated to weight over 13,000 tons. All of the walls (inside and out) are inlaid with precious stones, a process demonstrated for us by a nearby shop owner. Craftspeople would cut the precious stone into the desired shape and trace the outline on a piece of marble. Then they would hand-chisel an indentation barely 1/8″ deep into the marble before cementing the stone onto the marble. It’s no wonder the structure took over a decade to complete. 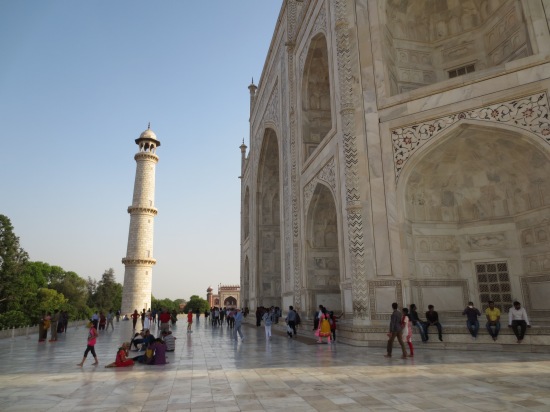 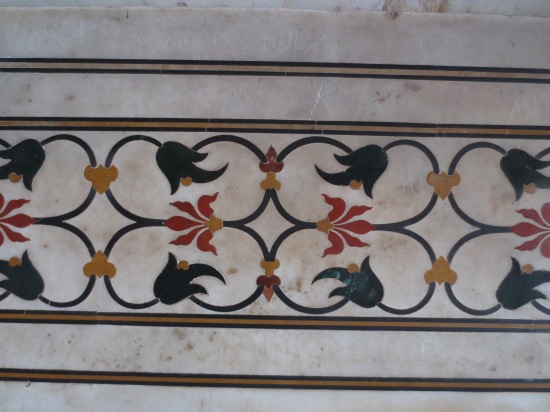 Intricate, hand-chiseled inlays in the marble

Beautiful designs on the interior 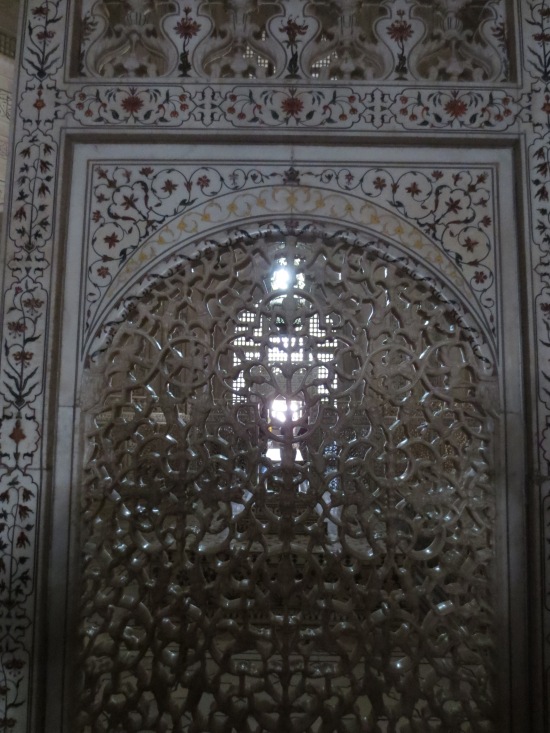 Door to the central tomb area

There was one unpleasant aspect of visiting the Taj Mahal: everyone taking pictures. The odd thing was they didn’t want to take pictures of the Taj Mahal. They wanted to take their pictures with us. At first it was funny and endearing. But after the 250th person asked to take our picture, it got a little old. Apparently, it’s good luck to take a picture with a tourist. Still, we felt compelled to point out that, while we may be worthy subjects for a photo on an average day, behind us is one of the greatest buildings ever constructed. Sidney suggested we start charging 5 rupees a piece. We could’ve probably funded our entire trip that way. 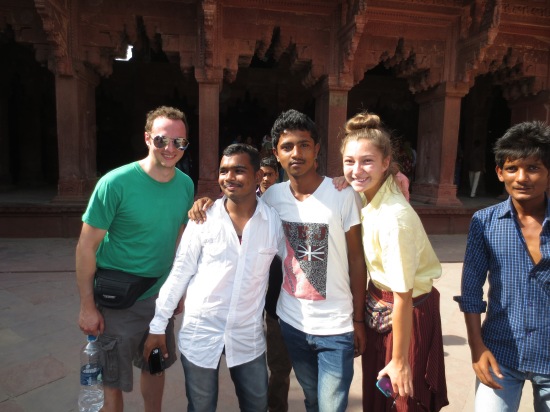 Excuse me, may I take your picture?

After a long, hot (104°F) day, we headed back to the hostel for some rest. The next morning we took the train back to Delhi. After getting a little lost during a frantic search for anywhere that had AC, we settled into a Nepali restaurant and killed time before our evening flight to Kolkata. Our time in Delhi and Agra was short. I would have enjoyed spending another day or two exploring each city. However, we were all anxious to get to Kolkata.