Korean bathrooms. Who knew they could be so entertaining? I’ve regaled many a’folk with tales of our shower. The shower is connected to the sink, so if you forget to turn the knob to disable the shower, you get a refreshing surprise next time you turn on the sink. Inevitably, this always happens when you’re fully clothed. I’ve learned the skillful art of dodging, and can even do it while holding a toothbrush.

Today brought another such adventure.

Let me first offer a bit of back-story. Last week, my sister and her husband visited us. On their last day here, they went on a morning hike up the mountain behind our house. When they returned home, they found the apartment locked. Sara came home for lunch, but had lost her key several months ago. The landlord and I are the only two people who have that key, which means he must have come into our apartment at some point during the day and locked the door on his way out. Sara had to call her coteacher, who called the landlord, who wasn’t home, who had to come home and let them in. Her coteacher also asked if the landlord had entered our apartment when we weren’t there.

The landlord denied doing any such thing.

So this afternoon, I come home from work. I walk into the bathroom and am greeted with this: 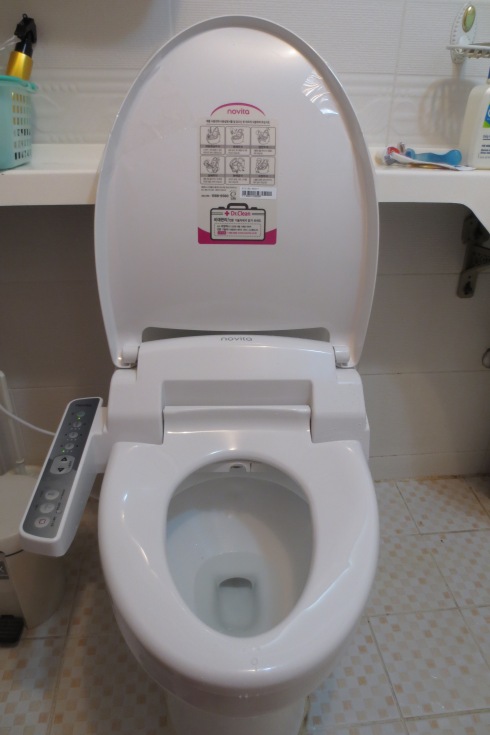 Now, I’m not the most observant person in the world, but I think I would have noticed all those buttons on the toilet this morning. I was shocked and amazed. Not by all of the incredible features on the Flushinator 3000, but by the fact that the contraption had teleported into my apartment and installed itself. (After all, our landlord would certainly not enter our apartment without our permission).

After I regained composure, I took a seat on the new Flushinator 3000. As soon as I sat, I immediately stood back up. The Flushinator has a heated seat, and the heat was cranked up to 11. As my backside recovered from its singeing, I attempted to turn off the heater. Since the Flushinator is only in Korean, I resorted to randomly pushing buttons.

If in doubt, push buttons at random.

I was standing directly in front of the toilet, when this happened (it must be Karma)…

One of the most effective, most basic methods of learning a language is mimicry. Babies are all about it, and it works pretty well for them. They pick up language faster than anyone else. (OK, they may have some other advantages, but whatevs.) Often if I’m in public with nothing to do, no one around, and some time to kill (such as on the bus, waiting to meet a friend, etc.), I’ll quietly repeat things I hear to practice Korean. I’ll parrot the radio, an overheard conversation, the bus stop announcer lady, whatever.

There’s a coffee shop that I stop in at nearly every morning on my walk to work. It’s a buck for an Americano. The coffee is crap, but it’s cheap, and Korea is generally lacking in quality coffee, so I don’t feel too cheated. I’ve gotten to know most of the women who work at the shop; they know me and my order. About a month ago, I noticed that they always say the same phrase every time that I leave. I’m not quite sure about the Korean, but it’s something like “taoseyo” (다오세요). They’d always say it right before I walked out the door, after they’d thanked me for my business. So I figured it was some form of a farewell. Perhaps, “See ya later,” or, “Have a good one.”

I decided to employ my stellar language learning technique, and wished them a “다오세요” back. I’m sure I butchered the pronunciation, but who cares!? For the next few weeks, I would always wish them a “다오세요” back before leaving the store. I was quite proud of myself for picking up a new phrase all by myself.

Then one evening Sara and I were having dinner with her coteachers. As we were talking something one of them said sounded familiar to this phrase. I realized to my delight that I had someone here who could probably understand my hackjob pronunciation enough to translate this mystery farewell phrase. I asked her what it meant. It took me repeating it a couple times, but she finally understood me.

I promptly stopped using the phrase at the coffee shop.

Well, I just started week three of classes. I’ve met most of my kids. (There are close to 350 of them, who I see about once a week). Here’s a couple gems from my first two weeks…

I’m sitting at my desk after lunch working on a lesson for next week. One of my students (who’s a serious fan of the Rolling Stones and David Bowie) comes into my room and hands me a drawing that’s somewhat reminiscent of Piet Mondrain’s Composition II in Red, Blue, and Yellow.

I stare at it, blinking, trying to make sense of it for a moment. “What is it?” I finally ask her.

She smiles, “Thank you!” and walks out of the room

Once a week I have to read 40 new vocabulary words from a book over the intercom. I read each word three times, then read a sentence that uses the words. The vocabulary book was clearly created by a Korean who speaks English as a second language. Some of the “sentences” have been extra special:

Each time I come to a sentence like this, I cringe audibly on the intercom. So today I decided to read ahead in the book and see what landmines I’ll have to avoid next week. I get about halfway through when I come across the following word and accompanying sentence:

I just finished my first day of teaching and I am feeling like I can totally handle this. The kids are rowdy, but it is nothing I can’t deal with. My co-teachers are incredibly friendly and helpful. We have met a good number of people and are getting settled in our new neighborhood. Our apartment is starting to look and feel like home. We have a bank account and everything! Now the last thing is waiting on ARC “alien registration card” so that we can get internet at home. Unfortunately, this might take a month or so, but I am trying to stay positive, and I have internet at work in the mean time.

It looks like I am going to have a lot more down time here teaching than I ever had at the O school (not that there is really ever down time there)! I teach 22 hours a week and then “plan” for the other 18. So far, there is not much planning, and I think I am going to need to develop an internet hobby or work on my Korean during the down time. It is hard not being able to communicate very well with kids and teachers during the day. It makes for a lonely 8 hours. I have sat through a few lunches now with teachers who are all speaking Korean for the hour. Every now and then I hear “mi-gook” or “way-gook” which is “American” and “foreigner,” and all I can do is wonder what they are saying about me. It is a strange feeling. I am also hoping I can find other ways to connect with the kid,s because I am used to connecting with conversation.

Life in Korea has definitely been a challenge. As you all know, we travel a lot, but neither Davo nor I have ever been to a country that speaks as little English as Korea. We went to a restaurant the other day and put up two fingers and ordered “two” because we could not read the menu and we don’t speak Korean. We got “two” and luckily it was delicious. At the bus stop we look like a comedy show, and at the grocery it is a game of guess and check. In countries with roman letters a lot of the time you can make educated guesses about what something is or what it means. Here, you are fresh out of luck and everything looks like gibberish. I think Davo and I will learn a lot more Korean than we originally thought, because you can’t even get a taxi home if you don’t know how to say it in Korean! Luckily, our co-teachers help us out with a lot of things like getting a bank account, moving into our apartment, talking to our landlord, assisting with the ARC card, and internet but it is a strange feeling being completely dependent on a person you met a week ago.

Having a sense of humor here is crucial. In our bathroom the sink is connected to the shower, similar to how the bathtubs at home are connected to the shower. In order to turn on the shower you turn a knob on the sink that makes the water flow to the shower instead of the sink. The shower is just in the bathroom and everything in the bathroom gets wet when it is on, no curtain. So, the other day I am getting ready for school. I am all ready for school, and I go to wash my hands and BAM the water was not changed back to the sink and I got a shower in my clothes! Next I will tell you about the trash… o-boy is it hard core even for us earth loving hippies! Later for now!

Remember going to camp when you were a kid? Boys weren’t allowed in the girls’ cabins, and vice versa. Everyone snuck out past curfew to meet up with their crushes or had to sneak them into their room without getting caught. Life feels about like that right now.

We’re at Ulsan’s new teacher orientation, and they don’t have couple housing. So Sara’s in a dorm room with a bunch of other women, and I’m in my dorm room with a bunch of guys. On the upside, we’ve made a lot of friends with all the other teachers, which is great! There’s some pretty cool folks here that we’ve enjoyed getting to know. While the majority are from USA and Canada, there are also a number of Brits, Aussies and South Africans. It makes for a fun mix. On the downside, having a summer camp girl friend has been pretty obnoxious. Oh well. We’ll be in our new home by the end of the week.

Which, by the way, we’re excited about! We’re going to be in 연암동 YeonAm Dong (literally, ‘soft rock neighborhood’), which is northeast of the city, right beside the airport. I’ve marked our schools on a Google Map. I will be teaching middle school, and Sara will teach elementary school.

Orientation so far has been primarily a crash course in Korean and an introduction to 울산 Ulsan. We’ve explored the three major expat hangout spots already. Last night we went out with some other new teachers and made friends with several other teacher who have been here for a while. We also had some delicious, late-night, street-food momos! Mmmmm. I could get used to that.

Today was our day off, so we tried to go see the new Batman movie, but it was sold out when we arrived. Instead, we spent our time exploring the grocery store and taking an inventory on the food situation. As it turns out, it looks like we’ll probably be able find a lot more of the food we’re used to cooking than we initially supposed. Some items were very expensive, like olive oil. We even found cheese, although the prices for it were listed in body parts rather than Korean Won.

We’re hoping to get our cell phones by Tuesday. We should also be in our new apartment by Friday. Classes start Monday. Woohoo!