Our epic travels are coming to a close.  Last night we got into Prague 6 hours later than expected at 2am after 20 hours of driving and we were exhausted.  Now we have 3 days to pack up our stuff, get anything we need, get our documents together, and head to Korea.  I am very much looking forward to unpacking and settling in. Davo and I have been incredibly fortunate to have the opportunity to cut loose and run around the world for 6 weeks.  We have seen some of the most beautiful landscapes I have ever laid eyes on, and Croatia was the perfect finishing touch to our adventure.

Croatia was untainted relaxation in its purest form. I read 4 books, laid in the sun, snorkeled, swam, ate, and slept in hammocks while enjoying our house right on the crystal clear aquamarine ocean water with a mountain backdrop.  I know it was rough… 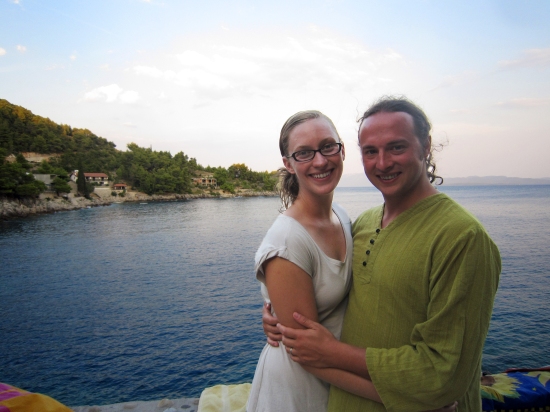 Here are some of the highlights:

One evening we went out to dinner to celebrate my father-in-law’s birthday.  We ordered an assortment of fish that were caught that morning on the bay we were eating on.  They were unbelievably delicious and we savored the evening sipping on Croatian wine topping the evening off with nutella crepes! YUM!

As some of you know, the Hynds family has tells many heroic tales of their times in Croatia catching an octopus while snorkeling.  On the last day of the trip, I still had yet to see an octopus, so we set out to remedy that situation.  That afternoon I saw three octopi and had the pleasure of taking part in their schemes to catch one.  Here is the tale of that adventure in picture form.  It was incredible but I have to admit I was happy it was not on me. 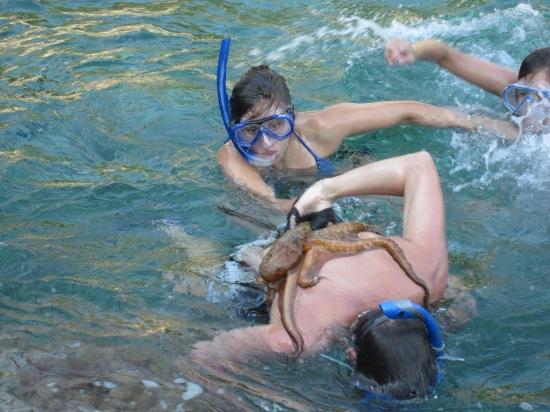 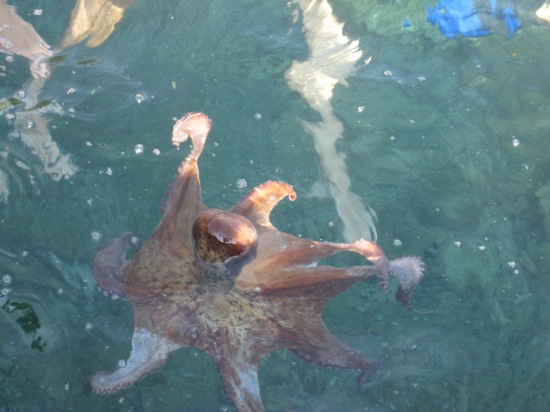 The only complaint I have about Croatia was that it was HOT and we had no fans or air conditioning (I slept with a wet towel most nights).  So, in order to cool off in the evenings we would jump in the water just before bed.  The first night that we decided to do this, we all went skinny-dipping (it was very dark, don’t worry) and as soon as we jumped in the water, we were all alarmed to see that we were glowing.  After we got over our fear that we were all lite up and naked with the siblings, we realized that we were swimming in some sort of bioluminescent plankton. Umm… SWEET! This was for sure one of our major highlights but there are no pictures 🙂  Davo might expand on this because he cares about biology and stuff… I just thought it was sweet that I was swimming in glowing bubbles. 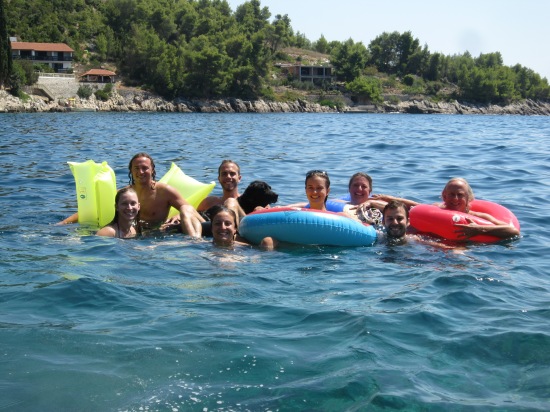 One thought on “Croatia.”